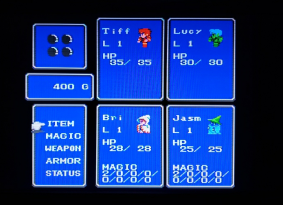 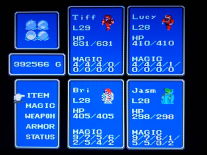 Christmas 1990 was my season of Final Fantasy. Enix’s Dragon Warrior (aka Dragon Quest) had served as my introduction to turn-based RPGs the year before and I was chomping at the bit for more of that same monster bashing, treasure hunting, level grinding fun. Nintendo Power magazine had been pushing the game like nobody’s business over the lead-up to the holidays, going so far as to make their October issue a dedicated 80-page strategy guide. I suppose they were still banking on RPGs blossoming into a national craze here the way they had in Japan. Sorry, guys. Between my own recent gaming experiences and this unrelenting press hype, I couldn’t shut up about Final Fantasy. There was no doubt in my mind it’d be waiting for me under the tree, although that might just be because I made it a point to discover where the presents were secreted away beforehand so I could check.

Obsessed? Maybe a little. In any case, it’s tough to blame me. Square’s little Dragon Quest killer that could represented a major leap forward for Famicom RPGs when it debuted in Japan in December of 1987 and that impression carried over to its eventual American release. To understand why, it’s useful to compare it to its most prominent Japanese competitor, Dragon Quest II. Not only did the much flashier Final Fantasy clean up in the graphics department, its RPG mechanics were exponentially deeper. Dragon Quest II’s party of three predefined characters was child’s play next to Final Fantasy’s four member team built from the player’s choice of six distinct character classes. Combat also received a shot in the arm. Dragon Quest’s static first-person view was replaced by a revolutionary battle screen that showcased both the monsters and animated versions of the player’s party. Even the methods used to navigate Final Fantasy’s sprawling world felt like a step up. Both games give the party a sailing ship for ocean voyages, but Final Fantasy threw in a canoe for rivers and that almighty franchise staple, the Airship. In short, lead designer Hironobu Sakaguchi and his team really threw down the gauntlet with this one. Final Fantasy is a bold, swaggering title that’s better than the first two Dragon Quests combined and knows it. In retrospect, it had “flagship” written all over it. It’s no wonder Square swiftly abandoned its eclectic roots to become a highly focused purveyor of RPGs thereafter.

What does one actually do in Final Fantasy? Well, in terms of story and overall gameplay structure, it’s an archetypal late ’80s console RPG. Four heroes known as the Light Warriors are prophesied to appear when the world is in peril, each bearing a darkened orb representing one of the elements. Their mission is to restore light to these orbs by defeating the four Fiends, an alliance of evil magical beings responsible for turning said elements against humanity. This is accomplished via the usual mix of open-ended wilderness exploration and dungeon delving fetch quests, during which thousands of randomly appearing monsters will be slaughtered for their precious gold and experience points.

Like virtually all other RPGs of its era, Final Fantasy lacks the extensive characterization and constantly evolving plot lines that would become synonymous with the genre in the decades to come. NPCs express themselves with the most concise of declarations and none of the Light Warriors are given a single line of dialog. It’s a basic “save the world” errand with no elaboration furnished or required. The primary reason anyone would want to experience it, then and now, is the wealth of meaningful choices baked into in its core mechanics.

The main attraction is that character class system I mentioned. I can’t say enough good things about the six options on offer here. Three of them (the Fighter, Black Belt, and Thief) are primarily physical combatants, two (the Black and White Mages) are useful only for spellcasting, and one (the Red Mage) attempts to split the difference. Within these broad categories, care was taken to ensure every class shines in its own way. The Fighter, for example, is a rock. He can use any weapon or armor and is a steady, reliable source of melee damage throughout the game. The Black Belt, on the other hand, starts incredibly weak and the few items of equipment he can use only tend to make him weaker. By the late game, however, the Black Belt’s bare hands will drastically out-damage the Fighter’s best weapons. The Red Mage works much the same, except in reverse. His combination of magic with decent weapons and armor makes him the strongest class by far early on, yet he ultimately can’t keep pace with all the high-end spells and gear of his more focused counterparts. On top of all this, some classes can gain all new abilities partway through the game as part of an optional quest. This system of trade-offs makes Final Fantasy exceptionally replayable. Want to try an all physical or all magical team? Go for it! Four White Mages? You’re insane, but the game won’t stop you!

Another facet of Final Fantasy I enjoy is the combat. This is mainly due to one very controversial quirk of the battle system: Specific enemy targeting. Unlike in most turn-based RPGs, you don’t target whole enemy formations with your characters’ physical attacks, only single baddies. This feature is often perceived as a flaw or annoyance, since if two Light Warriors are going after the same monster and the first one kills it, the second hero’s strike will whiff for lack of a valid target. Most later revisions of the game remove this penalty in favor of a more forgiving automatic re-targeting. That’s a pity, as I think the older method is great. It forces you to plan each and every turn carefully in order to avoid wasting valuable moves. You need to consider the average damage output of your characters, the hit point totals and defenses of their opponents, etc. All these mandatory mental calculations are a perfect antidote to the mindless “mash the attack button to win” default of many other RPGs. If you’re looking for a solid reason to consider the classic NES version of Final Fantasy over its many remakes, this more involved and challenging take on combat is it.

On the flip side, the best argument for those remakes is the ludicrously buggy nature of the original. Final Fantasy shipped with an extremely ambitious magic system for the time and most of it either doesn’t function as intended or doesn’t function at all. The intelligence statistic is supposed to govern the strength of spells. In reality, it’s meaningless and this greatly hampers the effectiveness of late game attack magic. Some spells, such as TMPR, SABR, and LOCK, do nothing. LOK2 has the opposite of its intended effect, making the foe you cast it on harder to hit rather than easier. There’s also a whole cycle of enchanted swords meant to deal increased damage to particular enemy types. None of this bonus damage was actually implemented, resulting in a bunch of mediocre “non-magic magic” weapons you’re better off simply selling. I’m only scratching the surface here, believe it or not. While not quite game breaking, this avalanche of cumulative programming blunders serves as an unfortunate beginner’s trap for anyone not already well-versed in playing around them. If you have the ability to run patched game ROMs from a flash cartridge or in an emulator, do consider loading up AstralEsper’s Final Fantasy Restored or a similar fan-produced bug fix.

Looking past its bare bones narrative and litany of baffling bugs, I’m still in love with the first Final Fantasy. I love its timeless Nobuo Uematsu score, highlights of which were destined to be reverently repackaged into every subsequent series entry. I love its eldritch and intimidating Dungeons & Dragons-inspired monster designs by master illustrator Yoshitaka Amano. Above all, I love its anything goes class system. Case in point: Halfway through writing this review, I got the urge to see how a group of two Black Belts and two Red Mages would fare. Just like that, I’ve started my next playthrough! So here’s to my first thirty years with Final Fantasy. Maybe I’ll finally be bored of it when 2050 rolls around. I wouldn’t bet on that if I were you, though.