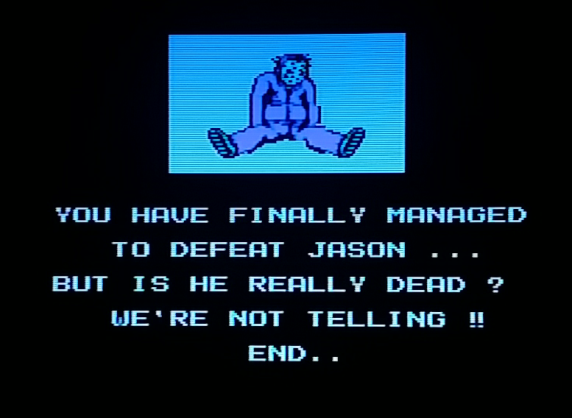 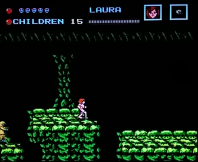 The time has come to realize my destiny as a true innovator. Brace yourselves for this one, folks: I’m going to review the Friday the 13th NES game on Friday the 13th! Now I know how Neil Armstrong felt.

Okay, so it’s not exactly original. I guess the Halloween lover in me just wanted an excuse to get a head start on next month’s annual spooky game roundup. This’ll do.

There’s a good chance you’re already familiar with this infamous Atlus-developed take on the classic slasher saga. LJN published it exclusively here in North America in February of 1989, between the seventh and eighth movies, and it’s been a magnet for negative buzz ever since. Ask anyone with a knowledge of the NES library beyond Mario and Zelda to rattle off some crappy licensed games and Friday the 13th will usually be at or near the top of the list. For three decades now, it’s been universally panned as confusing, frustrating, and a host of more profane things to boot.

Or has is? Over the past few years, a sustained effort by admirers of the game to re-frame it as a misunderstood survival horror pioneer has gained considerable traction. This led to officially licensed toys modeled on arch-psycho Jason Voorhees’ garish NES color scheme and a hilarious callback to the same in IllFonic’s much better received 2017 Friday game. Could these fans have been right all along? Did critics and the general public alike dismiss Friday the 13th merely for being ahead of its time and refusing to conform to conventional action game stereotypes?

The debate surrounding this one may be complicated, but at least its plot isn’t. Hockey mask-clad murder machine Jason is running amok at Camp Crystal Lake. A team of six teenage camp counselors must band together to defend themselves and their fifteen young charges from Jason’s onslaught. If Jason does manage to slaughter either all six counselors or all fifteen kids, the game is over. In true slasher movie fashion, “killing” Jason once won’t be enough. He needs to be put down a total of three times over three consecutive days to end his rampage for good.

Friday the 13th isn’t based on any specific entry in the film franchise. That said, savvy horror buffs will spot some obvious nods here and there. The opening animation with the knife penetrating the mask is clearly based on the poster for The Final Chapter and the gameplay itself incorporates several ideas from Part 2. One thing that stands out as odd is the choice of protecting children from Jason as a primary goal. Jason never killed kids on the big screen. The MPAA and other movie rating boards hated the series enough as it was. There’s no way the studios would have antagonized them that blatantly. Although all child death in the game takes place off-screen, it’s still arguably the bleakest concept ever broached on the NES. Kudos to Atlus and LJN for pushing that envelope, I guess.

In terms of mechanics, Friday the 13th is a sort of strategy/action hybrid. Controlling one counselor at at time and switching between them as needed, the player is tasked with scouring the camp for hidden items required to defeat Jason while also responding in a timely manner to the maniac’s unpredictable attacks on the other characters. Jason’s murder attempts on the kids and non-active counselors in their cabins are frequent, perhaps too frequent, and he can show up on the trails to interrupt your exploration in a more direct way, too. This makes time management the most crucial component of the game. You need to figure out how to the get the stuff you need and then make it happen fast. Unless you’re able to get your hands on more powerful weapons early, the best you can hope for is to drive Jason off temporarily, knowing full well he’ll always return and eventually whittle your beleaguered team down to nothing.

Gearing up for battle is no mean feat. As if Jason’s constant harassment wasn’t enough, the only real help the game provides is a hint to try lighting all the fireplaces in the larger cabins. If you can accomplish this with a single counselor, you will indeed be rewarded with a flashlight that reveals secret doors in the cave area. Beyond that one helpful tip, you’re on your own. Learning the ins and out of staying alive long enough to fight back is a protracted trial-and-error process. For example, you’ll soon catch on that not all camp counselors are created equal. Mark and Crissy are vastly better at running and jumping than the rest of the crew, so it’s best to not bother using anyone else for exploration and item gathering. The optimal plan is usually to focus on obtaining the best equipment for Mark and Crissy while stationing the other, more disposable teens as close to the kids as possible so they can act as cannon fodder to repel Jason attacks.

I believe this strategic bent, sketchily-documented as it is, constitutes much of what Friday the 13th’s defenders are responding to when they feel compelled to stick up for it. I say that because it can’t possibly be what passes for action here, which is frankly terrible. Traversing Crystal Lake from a side-view perspective fending off an endless supply of birds, wolves, and out-of-place zombies is wholly unsatisfying in itself. I get why the designers wanted to include some non-Jason baddies. The big guy would rapidly lose his mystique if he had to serve as sole obstacle to your progress. This is a far cry from Mega Man or Ninja Gaiden caliber combat, though. It’s shallow, stiff, and more of a rote chore than anything else.

Fighting on the trail may be dull, but it’s a picnic compared to taking on Jason inside the cabins. These encounters utilize an over-the-shoulder third-person view reminiscent of Mike Tyson’s Punch-Out!! sans any degree of polish or charm. You dodge Jason’s swings and fire back as best you can until he flees or one of you dies. This is doable with a little practice on the first day, when Jason is relatively slow. All bets are off after that, as the masked marauder grows exponentially quicker over subsequent days, eventually becoming nearly impossible to evade. Suddenly, the game’s insistence that you go inside to protect the defenseless kids from Jason makes sense. If they weren’t a factor, venturing indoors at all after day one wouldn’t be worth the risk.

So, apart from those few cool strategy bits, Friday the 13th is cryptic, punishing, and hamstrung by some truly wretched combat. It would tough to recommend to anyone if it wasn’t for one thing: It’s damn effective survival horror! Yeah, I was surprised, too. Turns out the scramble to prepare for the final showdown with Jason while simultaneously enduring his relentless assaults is laden with genuine tension and an atmosphere of impending doom so thick you could cut it with a machete. As with any proper entry in the genre, you need to play cautiously and exercise good judgement when it comes to managing healing items and other limited resources.

Most important of all for a game based on one of cinema’s premier monsters, Friday the 13th does its villain justice. Jason’s sprites are large and imposing by 1989 standards. He can show up just about anywhere at any time to ruin your day, accompanied by an appropriately startling musical sting. He can kill off one of your hapless counselors in just a few hits and is effectively invulnerable to anything less than the strongest weapons. In short, he lives up to the hype. This makes it immensely satisfying to finally turn the tables on him. As a devotee of the film series, I can’t deny that Friday the 13th is fundamentally faithful to the spirit of its source material. That’s more than I can say for most old licensed games.

By no means is Friday the 13th a world-class NES release. I’d wager few outside its hardcore following would even rank it among their top hundred games for the system. I maintain it’s miles above true LJN-published travesties like Uncanny X-Men and Bill & Ted’s Excellent Video Game Adventure, however, and worth a fresh look next time you’re in the mood for some 8-bit terror. You may end up hating it, but things could always be worse. You could be watching Jason Goes to Hell.