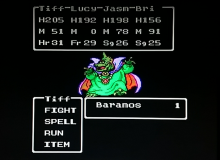 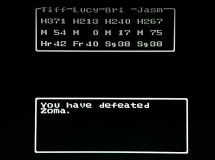 Enough screwing around: It’s time to review the single greatest game of the entire twentieth century!

According to readers of Famitsu magazine, that is. In August of 2017, Japan’s most revered video gaming publication celebrated its 1500th issue by polling its readership to determine the 100 best games of all time. The number one slot went to 2016’s Persona 5. Number two was Dragon Quest III.

Surprised? I was, too. The game’s North American release, under the alternate title Dragon Warrior III, is remembered as a modest cult classic at best. Of course, it’s common knowledge that the RPG genre enjoys massively popularity in Japan and has ever since the very first Dragon Quest dropped in 1986. The remainder of Famitsu’s list is overwhelmingly stacked with Japanese-made console RPGs in the Dragon Quest mold, often called “JRPGs” by outsiders. In contrast, only a small handful of JRPGs like Final Fantasy VII and the main series Pokemon games have managed to attain comparable mainstream success in West over the years. But why is this specific entry in the long-running series held in such high regard? What does its country of origin see in it that the rest of us, for the most part, don’t?

One major factor is timing. There was a staggering four year delay between Dragon Quest III’s 1988 Famicom debut and Dragon Warrior III’s 1992 arrival on the NES. To put that into perspective, North American Super Nintendo owners had been gawking at Square’s flashy 16-bit epic Final Fantasy IV (under its misleading Final Fantasy II moniker) for three months at that point. That Enix bothered releasing Dragon Warrior III at all under these conditions is surprising. Most of its major innovations (a robust character class system, large world to explore, and dynamic day/night cycle) were either well established by 1992 or simply didn’t blow minds the same way 256-color graphics or faux orchestral soundtracks did. Dragon Warrior III’s party of silent protagonists undertaking routine fetch quests to slowly save the world from a motiveless evil overlord also came off downright quaint next to Final Fantasy IV’s flamboyant anime style melodrama.

On the other hand, as a 1988 release for the Famicom, Dragon Quest III was a massive leap forward for the series and for JRPGs as a whole. There was a greater increase in overall gameplay depth here than in any other single Dragon Quest sequel before or since. The original saw the player controlling a single, non-customizable hero. The second game upped the party size to three, with each character’s abilities still remaining fixed. Dragon Quest III expanded the maximum party size again to the now standard four and introduced custom character creation to the mix. While you’re still required to have the game’s main hero in your party at all times, the other three slots can be filled with any combination of male or female members of seven distinct character classes: Soldier, Fighter, Pilgrim, Wizard, Merchant, Goof-Off, and Sage.

The first Final Fantasy, released around the same time, also let you choose your party composition in this way, but DQIII did it one better by permitting characters to change their classes any time after reaching the 20th experience level. You could create a physically feeble Wizard, level him up to learn a variety of useful attack spells, and then change him into a heavily armed and armored Soldier without losing access to any of the magic he’d previously mastered. One class, the almighty Sage, isn’t even available at the start and can only be transitioned to later by meeting certain esoteric requirements.

Cultural context is another angle to consider. Veterans of old school Western RPGs are likely scratching their heads right now and asking, “What’s so amazing about getting to choose classes for your party members?” Absolutely nothing, if you cut your teeth on Wizardry, Ultima, and other Dungeons & Dragons-inspired computer games of the period. Bear in mind, however, that the JRPG sub-genre left most of that mechanical complexity behind at its inception in the interest of appealing to a mass audience of Famicom owners accustomed to the likes of Super Mario Bros. In this gaming milieu, the degree of unbridled freedom DQIII’s character creation system represented was nothing less than spellbinding. It sold over a million copies in Japan on release day alone. In an era before pre-orders and online shopping, that meant more than one million people flooding retail stores on the same day with cash in hand. This planted the seed of the long-standing myth that the Japanese government passed a law forbidding Enix from launching future Dragon Quest games on weekdays due to concerns over widespread truancy and lost productivity.

And…I’ve done it again. I’ve spent more time talking about the history of a Dragon Quest game than about the game itself. Like I said last year in my review of the first game, these early entries in the series play such a central role in defining what a JRPG is that they tend to come across as hopelessly generic when you actually start breaking down their stories and gameplay in detail. It’s a bit like trying to describe the flavor of unseasoned rice cakes.

Dragon Warrior III opens with the main hero waking up on his or her sixteenth birthday and being instructed to speak to the local king. The king explains that the young hero is the son of the legendary adventurer Ortega and consequently the only one who can save the world from an “archfiend” named Baramos. Strangely, even though you’re given the option of making the hero male or female, both versions of the character are represented by the same sprite and all of the dialogue refers to you as Ortega’s son in any case. Is it an oversight? Is the girl hero supposed to be just that butch? Beats me. After this little info dump, the king forks over a ridiculously small sum of money and waves you off to the local inn to create the rest of your party.

Once you’ve gathered your companions, it’s time to venture out into the field and settle into the usual series routine: Finding the next town, figuring out what the problem there is, sorting it out at the local dungeon, and being rewarded with whatever key or other item you need to access the next chunk of the map. All the while, you’ll be chugging through the constant stream of random turn-based monster battles needed to raise your characters’ experience levels and gain the cash necessary to upgrade their gear at the shops.

Depending on your temperament, this core gameplay loop is either hypnotically soothing or a mind-numbing living death. In any case, I found that this installment at least does a much better job than the original Dragon Warrior of giving the player new goals to pursue on a fairly regular basis. You’ll still have to deal with just as many repetitive random encounters as before, but a larger game world and more quest objects to fetch means that you’re rarely ever forced to stop exploring completely just to grind experience or gold. This one improvement single-handedly negates my biggest criticism of the first game.

On the subject of improvements, and despite all the wisecracks I made above about its generic story, Dragon Warrior III does feature one major plot twist at around the the 3/4 mark that’s quite clever and well-presented for the time. Credit where it’s due, this really would have been quite the jaw-dropper for fans circa 1988 and likely constitutes another major reason the game is so fondly remembered in Japan.

Between the added flexibility of the class system, the more fleshed-out quest, and that nifty plot twist, Dragon Warrior III represents a massive upgrade from its predecessors and is my pick for the first truly great entry in the series. Is it game of the century material, though? Hardly. I wouldn’t even rank it among my top three Dragon Quest games. For all the refinement it brought to the nascent JRPG formula, it still suffers from some woefully aimless and anemic storytelling. Your party of heroes are mute ciphers from start to finish. Only one is given the slightest semblance of a backstory or motivation (being the son of the great Ortega) and this still manages to amount to a whole lot of nothing in the end. The villains seem content to exist entirely off-screen until you eventually stroll right into their throne rooms, whereupon they recite a couple short sentences about how very evil they are before getting themselves killed. If the stars of the piece are this dull, you just know the regular NPCs you interact with in town don’t stand a chance.

Beginning with Dragon Warrior IV, the series’ creators would endeavor to include much more in the way of characterization. Every party member in that game came complete with a compelling reason why they chose to spend their days wandering the world beating up on assorted goofy Akira Toriyama monsters, be it duty, revenge, youthful rebellion, or just wanting to get rich quick. The main antagonist also had a tragic past and a coherent motive underpinning his genocidal ambitions. For me, this previously lacking human element was the final ingredient needed to make later installments like V and VIII some of my most treasured gaming experiences. With all due respect to Famitsu and an entire generation of nostalgic Japanese gamers, I find Dragon Warrior III to be, at the utmost, the greatest JRPG of 1988.

On the plus side, this does mean that I can keep on reviewing games, confident it’s not all downhill from here. I was worried there for a sec.