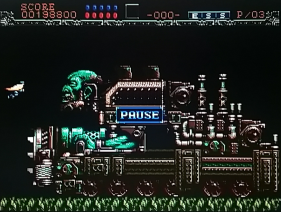 Whoa! Now those are some rock-hard pecs, bro!

I was pumped to do a full-on Brian Blessed hawkman dive into Wings of Wor for the Genesis. Also known as Gynoug outside North America, it’s a shooter from Masaya Games, creators of the relentlessly campy Chō Aniki (“Super Big Brother”) series of homoerotic flying bodybuilder simulators, so I figured I was probably in for some choice weirdness. Print ads from 1991 were even emblazoned with “WARNING: Avoid eating before playing this game.” It’s too bad for Masaya that I didn’t own a Genesis at the time. A game that promotes itself like a VHS release of Cannibal Holocaust would have been right up my alley as a kid. Happily, I can report that Wings of Wor delivers on its promise of a strange, icky time. It also happens to be quite the thrilling action game if you’re into that sort of thing. Freak.

According to the instruction manual, our story unfolds on the planet of Iccus, which is under attack by a being called the Destroyer. He’s used an “evil virus” to mutate the inhabitants of Iccus into “the grossest creatures ever to slime a tunnel.” Slime…a tunnel? Whatever you say, pal. The player controls a “winged battle master” by the name of Wor on his one man counter-offensive against the mutants. This is a perfectly acceptable no-frills justification for a sci-fi shooter. Frankly, though, I just don’t buy it. Wor himself appears to be a stone angel statue that’s come to life in order to confront the baddies (similar to God/The Master from the ActRaiser games), he picks up magical scrolls to use as weapons, and many of his foes are unambiguously supernatural beings like ghosts. I haven’t found any proof of it, but I’m betting the original Japanese version was the “heaven versus hell” story this all implies and has nothing to do to with viruses and alien planets. At least we got the better title over here. Gynoug sounds more like a candy bar filling than a high octane shooting game.

Wor has six horizontally-scrolling stages separating him from the end credits, although the last of them consists entirely of a standard boss rush against a total of seven opponents: Six recycled from previous stages and, finally, the Destroyer himself. While five true levels doesn’t sound like a lot, the ones we get here are at least half again as long as the genre standard, if not longer. A few of them may even be too lengthy for some players’ tastes. If you’re the type who likes to complain about the levels in Compile shooters dragging, Wings of Wor is likely to set you off in much the same way.

A major plus in any case is that each stage is wholly unique, both thematically and in terms of the enemies you’ll face. This density of design is always a welcome sight and would have done wonders for the subject of my last review, Legendary Wings. Apart from the aforementioned boss rush leading up to the finale, I can’t recall a single instance of the same monster re-appearing outside of its “home” level.

Complimenting all this enemy diversity, Wor has an above average selection of tools at his disposal for carving a path through the legions of hell. His standard weapon is a constant stream of small projectiles which fan out in a cone-shaped spread ahead of him. This can be modified to become a more concentrated straight ahead shot or a simultaneous forward and backward shot by picking up certain icons. Additionally, accumulating blue and red orbs will enhance the total number of projectiles fired and their damage, respectively.

There are also a variety of special magic abilities, represented as scrolls with letters displayed on them. Depending on the letter, these can represent powerful secondary weapons like thunderbolts and homing blasts or defensive shields that protect Wor. Abilities gained from scrolls are temporary (due to limited ammunition, time limits, or similar) and they also stop functioning when you lose a life. The really interesting thing about these scrolls, though, is that they don’t just automatically activate when touched. Instead, Wor has an inventory and can carry up to three at a time, activating them as needed. Inactive scrolls in the inventory aren’t lost upon death. Better still, collecting multiple copies of the same scroll in sequence will result in a more powerful version of the magic ability in question, creating an incentive to choose your pickups carefully.

It’s very robust and flexible system, which is good, as you’re going to need all the help you can get with this one. Wings of Wor is not an easy game by any means. The first couple of levels are fairly reasonable, but things ramp up quickly after that. The fifth stage in particular is a sadistic meat grinder, with fast-moving enemies swarming in from every side and firing off a variety of tricky bullet types for what feels like forever. Bosses can also put a lot of firepower on the screen at once, sometimes making things feel closer to a modern “bullet hell” shooter than most other games of the time. Deaths are of the one hit variety and continues are limited. Thankfully, there’s no harsh checkpoint system in place and Wor is able to respawn right where he died as long as he has lives in reserve. Even with this advantage and an impressive arsenal at your fingertips, it’s still going to require a good amount of practice to see this one to the end. One tip I can offer is to be sure not to pick up more than a couple of the speed boosting feather power-ups. The classic beginner’s trap of allowing the player character to become too fast and twitchy to accurately maneuver is in full effect here and it will get you killed if you’re not careful. This is one common element of old school shooters I don’t miss.

Enough boring gameplay specifics, though, am I right? The ad copy promised twisted monstrosities, so make with the crazy, already! Fine, fine. Things actually start out pretty restrained, which I like. It makes the first moment of true insanity all the more effective. You’re just flying through a cave, fighting spiders and falling rocks and other nondescript video game cave stuff. All the sudden, a screen-filling locomotive with a twitching human face and arms literally drops out of the sky and begins showering you with bullets. Yikes! What is this even supposed to be? Did the artist make the mistake of scheduling his ayahuasca trip and Thomas the Tank Engine marathon for the same weekend? This trend holds true through most of the game. The stages are mostly filled with typical fantasy-horror beasties with the end boss being some sort of gigantic human/steampunk machine nightmare hybrid, usually with a big creepy face. Nothing, and I mean nothing, however, can truly prepare you for the dick from level five. I’m not just being crudely euphemistic here, either. You fight a penis. One covered in blood and twenty times the size of Wor. There’s no ambiguity in the art, either. It’s not phallic, it’s a phallus. This makes R-Type’s boss design look positively subtle and might just be the most extreme visual in the entire Genesis library. I know Sega was all about doing what Nintendidn’t around this time, but it’s still amazing nobody vetoed this. After that madness, it’s just too bad the Destroyer himself isn’t all that interesting from a visual or gameplay standpoint. He mostly just sits still on the screen and barely animates while you slowly whittle his health down. Insert your own joke about the game’s premature climax here.

Other than the bosses, which are as lushly rendered as they are foul, the rest of the art in Wings of Wor isn’t particularly great. This is mostly due to Wor and his opponents being quite small and sparsely detailed. The backgrounds aren’t exactly spectacular on their own, either, although several of them are enhanced considerably by some sweet parallax and line scrolling effects. The soundtrack packs more of a punch than the visuals, with some very stirring heroic melodies urging you on. I particularly like that each stage has two themes, with the second one kicking in after you dispatch a mid-stage mini-boss. With the levels being as a long as they are, it’s nice to not have listen to the same audio loop throughout. The presentation overall isn’t bad. I would rate it as slightly above average, in fact. Just don’t come expecting an audiovisual feast like MUSHA or Thunder Force IV.

It may not be the prettiest or the most famous of its kind, but I have no reservations about recommending Wings of Wor to any 16-bit shooter fan looking for a challenge that’s formidable while rarely ever feeling unfair. It has solid control, a wide assortment of weapons, a strategic inventory system, a diverse soundtrack, and murderous hell genitals the size of a city bus. Who could ask for anything more?